This blog is due for an update! A lot of cool stuff has been going on, and I’m going to take a minute to celebrate, because I haven’t done enough of that. One of the things I’ve learned in the last couple months is to enjoy the big and small moments as they come. Give yourself a break for a little while to let it all soak in. You’re working hard, and you deserve to celebrate when you hit milestones. When people congratulate you and wish you well, receive the love.

On with the celebration!

I signed with an agent! After querying for a year (and with two books), I couldn’t be happier to be working with Sarah E. Younger at Nancy Yost Literary Agency. 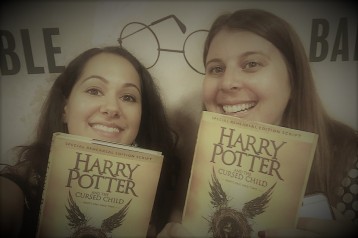 I got a trophy! TAKE THE LEAD won grand prize in NOLA Stars’ 2016 Suzannah Contest, and they sent me this sweet, shiny trophy. 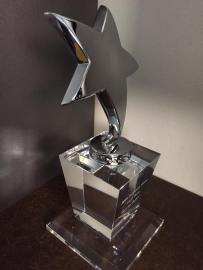 I’m a 2017 Golden Heart finalist! TAKE THE LEAD was nominated for the contemporary romance category. I’m looking forward to meeting the other GH finalists at RWA Nationals in July! 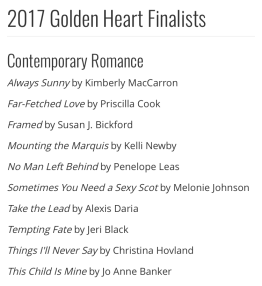 I got a book deal! A two-book deal, in fact! TAKE THE LEAD will be published by SMP Swerve later this year, along with the sequel, Project Roommates. I’m excited to be working with fellow DWTS fan Lizzie Poteet on these books. 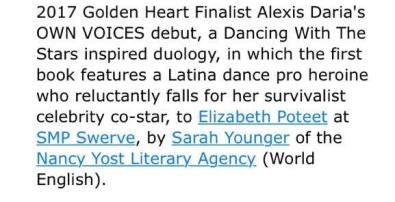 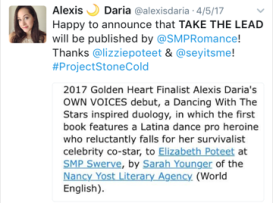 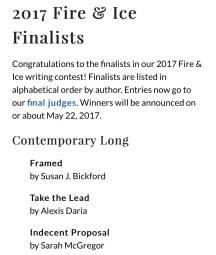 To sum up, the Suzannah contest led to an offer, which led to signing an agent. The Call happened a year and a day after I sent my first query letters (for Venus) and just over two years after I joined RWA. But really, I’ve wanted to be a published author since I was at least thirteen. It took a while for it to sink in that a long-held dream is finally coming true, but I’m keeping this at the forefront of my mind as I move ahead with book 2.

If you want to read a bit more about how I got the to book deal, check out my gif-heavy post on the RWchat blog: The Road to the Book Deal.