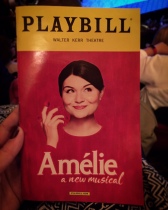 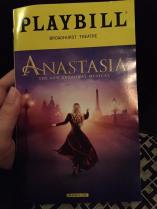 Last week, I posted reviews and video clips of the first four shows I saw this year. Here are the other four, with two video links for each: The Great Comet of 1812, Amélie, In Transit, and Anastasia.

END_OF_DOCUMENT_TOKEN_TO_BE_REPLACED

I always forget how energizing live theater is. Since I live in New York City, it’s easy to put off going to shows, because they’re always available to me. I fall into the habit of saying, “Oh, I’ll try to go later,” because it’s cold or I feel tired. And that’s how I end up missing shows.

Holiday Inn is playing at Roundabout Theater at Studio 54. The last show is January 15th. I heard it was good, and after I found out Bryce Pinkham (A Gentleman’s Guide to Love and Murder) was the lead with Corbin Bleu (of High School Musical fame), I knew I had to see it. Pinkham was phenomenal in A Gentleman’s Guide and Bleu was amazing on Dancing with the Stars. Since it was the last weekend, I bit the bullet and purchased a ticket for the second-to-last day through the box office. I even splurged, buying a better seat instead of “whatever is cheapest.”

END_OF_DOCUMENT_TOKEN_TO_BE_REPLACED 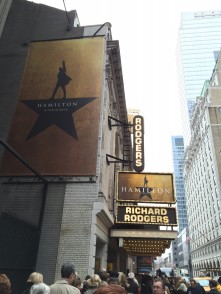 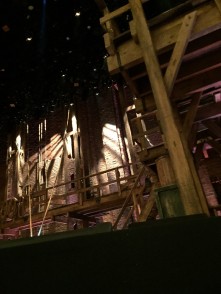 On December 9, 2015, after a week of listening to the Original Cast Recording of Hamilton non-stop, I went to the in-person lottery on a Wednesday at noon and won. I wrote this post in January, so I’m making H for Hamilton and finally hitting publish.

While the recording gives an accurate portrayal of what the show sounds like, there are a few aspects that are ten times more powerful on stage. Here are a few examples, in no particular order: END_OF_DOCUMENT_TOKEN_TO_BE_REPLACED